Everyone and their mother has had a piece at Piece, so this was a no-brainer to pay a little visit to this beloved pizzeria for the blog!

Nate and I doubled with Lindsey & Matt for an early dinner because it is infamously packed—early was a good call, and it was pretty calm, actually. I especially liked all of the twinkle lights and the pinball game near our table.

Nate and Matt ordered two of their award-winning house beers (who knew they brew their own beer!), and Lindsey ordered a glass of wine. The waitress helped me choose a Hitachino Nest White Ale, based on my love for Blue Moon and wheat beers. It was pretty tasty, and the cute owl on the label was an extra bonus.

Now it was time to choose our pizzas. Piece is New Haven-style pizza—Connecticut has it’s own style of pizza?! New Haven pizza traditionally has a generous amount of red sauce topped with garlic, extra parmesan, and olive oil.

After reviewing our options carefully, we decided on two large pizzas, one pepperoni pizza with red sauce (Matt’s go-to!) and one pizza with white sauce with two halves of different toppings. But which toppings? We went with the waitress’s recs: bacon and clam pizza on white sauce (they are famous for it), and sausage and basil.

The larges are like extra larges, perfect for sharing and having leftovers to heat up the next day. I also liked that the pizzas were big ovals cut into small triangles, allowing you to try more slices.

My first Piece? The pepperoni and it was a delicious, safe way to start. Then I went for a piece of the sausage and basil, which was my hands-down favorite! The sausage wasn’t too greasy, and the basil gave it a nice element of freshness. Ok, two for two.

Then came the bacon and clam pizza, which came with a side of lemons. I squeezed on my lemon, and I’ve got to admit, it’s just not for me. I’m really glad I tried it though. (Clams on pizza is VERY adventurous for me!)

So would I go back to Piece? In a heartbeat—I’m already craving the sausage and basil pizza again! I’d also like to try one of their house-brewed drafts next time. I’m glad that I can now be another voice in the crowd of people who enjoy Piece. 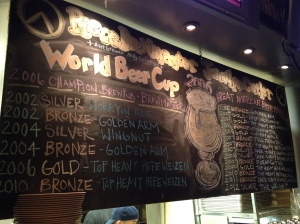 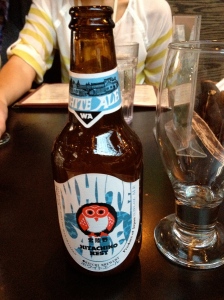 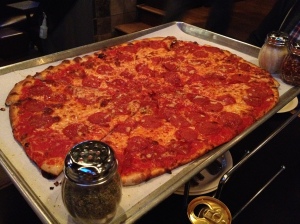 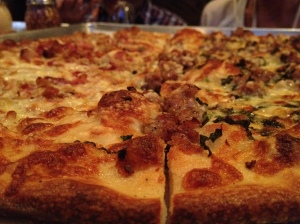 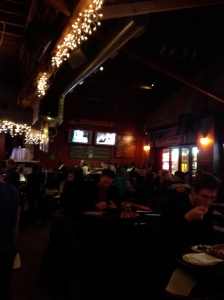