I have a confession: I feel really guilty.

Why? Because I’ve waited way too long (like three weeks!) to tell you about this little gem: Tête Charcuterie. Life gets in the way–work is busy, my sister AND sister-in-law had babies in the same week (yay!), I went to New York City for almost a week, we found a new apartment (more on that later), I had jury duty–but seriously, no excuses.

Let’s cut to the chase: this place is great on so many levels. The service is some of the best I’ve had IN MY LIFE. The menu is sophisticated, well edited, and a little adventurous. But let’s get into the details:

I met one of my oldest friends, Ali, here for a night of major catching up. We sat inside, where it was quiet and cool. Right away we were greeted, and Ali had the Three Amigos while I ordered a Tête a Tête, which our waiter said was a better version of a Moscow Mule. Sold! It was very tasty and refreshing. What made it even better was when the bartender came and checked on how the drinks were himself. That’s extra points in my book.

We wanted to try a variety of meats, so we went with the small charcuterie board, which includes a taste of everything: chicken liver pate, mortadella, salami, and the house specialty–head cheese–as well as thick, delicious bread slices, sweet pickles, and whole grain mustard.

I have more to confess: I was nervous about eating the head cheese. If you don’t know what head cheese is, it’s a meat jelly (no dairy here) made with various parts of the pig’s head–very European. I questioned trying it, but like the saying goes, “When in Rome…”, right?

So Ali and I tasted it at the same time, and…it wasn’t bad at all! Moreover, what makes this board so good is that each bite is deliciously unique. And it’s really the perfect portion for two people to share as a meal. While we were eating, we were checked on again by Amanda at the hostess stand. More points for Tête!

But we couldn’t end there. We decided to go with a rich and creamy artisan goat cheese with strawberries, dried apricots, and more of that delicious bread for dessert with a glass of Hi! Prosecco–a perfect pairing, if you ask me. It was a great choice to end our evening with a little sweet…or so we thought…

Then Dan, general manager and partner of Tête, stopped by to chat, and brought out a sample of the applewood smoked bacon. (I mean, who can turn down a delicious piece of bacon?!?) It was the perfect amount of smokiness and melted in my mouth. What a decadent end to a wonderful meal.

Now, when we were there, Tête just had its three-month anniversary, and Daniel told us they will have their own cured meats to try in a month or less (ours were from West Loop Salumi just across Randolph Street)–I know I will definitely be coming back to try them.

Honestly, if you want incredible service and delicious, unique fare, head to Tête Charcuterie. The care that they put into their food and their customer service shows. It’s perfect for date night, a night with the girls, a group, you name it. Just make sure you go. 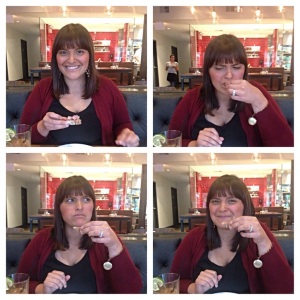 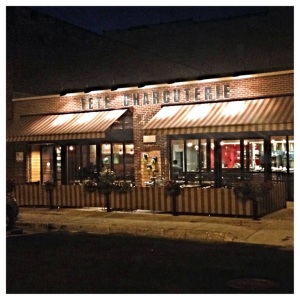 When I heard that Hot Doug’s, the Sausage Superstore and a Chicago institution, is closing on October 3, I felt discouraged that I might not get to go. Weeks ago, my sister-in-law, Melissa, and brother Chris asked if we’d like to go together. Last Saturday we went. Here’s a (shortened) play-by-play of our experience–the 3.5 hour version might take awhile!

10:30 am: Go to the ATM because Hot Doug’s is cash only. Chris and Melissa pick us up, and we head north.

10:54 am: We arrive at Hot Doug’s. On California we only see a short line…then we turned the corner onto Roscoe. There they are: a line of people half a block down. Mind you, Hot Doug’s opened at 10:30 am.

Noon: The sun is so hot, we get an umbrella from the car. The restaurant is giving hose water to those who need it. The ice cream truck is parked, and people can’t get enough water and ice cream.

1:30 pm: I’m starting to lose it. It’s like a marathon, and I worry I’m not strong enough. We are so close, but so far away. Doubting my decisions. Feeling dumb for waiting so long. Just outside the door…

2 pm: We are in the restaurant. It’s small, but strangely quiet and peaceful with lot of memorabilia, a very different scene from outside. If the line outside was hell, this is heaven. I’m staring at the menu; this sausage superstore has so many choices, like Polish, Bratwurst, Chicken, Italian, and vegetarian, plus daily specials like The Atomic Bomb, Shrimp ‘n Grits, and Hot Doug’s BLT. I’m salivating. Not only do you choose your sausage, you can choose how you want it cooked (chargrilled, boiled, or fried) and your toppings.

2:30 pm: We order with Doug. This man is so nice. If you dislike him or behave badly to him, there’s something wrong with you. Same goes with the rest of the staff.

I get the chargrilled bratwurst with caramelized onions and ketchup. I know this isn’t the most adventurous order (I leave that to my hubby), plus my first-ever corn dog (they’re kind of sweet? Who knew?), and duck fat fries to share. Nate gets three specialty dogs: One Third Pound Cheddar and Beer Pork Sausage, Hot Sauce Chicken Sausage, and Veal Saltimbocca Sausage.

So, the ultimate question: Was it worth it? If you would have asked me while I was sweating in the hot summer sun, I would have said no. But once we got inside, I was so glad to be there. The end is near for this gem, and I can say I’ve been there, I’ve endured the line, and honestly enjoyed the delicious food. Oh, and I took my picture with Doug! (Did I mention how nice he is?) That said, I think this is a once-in-a-lifetime deal, and I’m okay with that. Just so glad I was a part of legacy.

Are you up to the challenge?!? 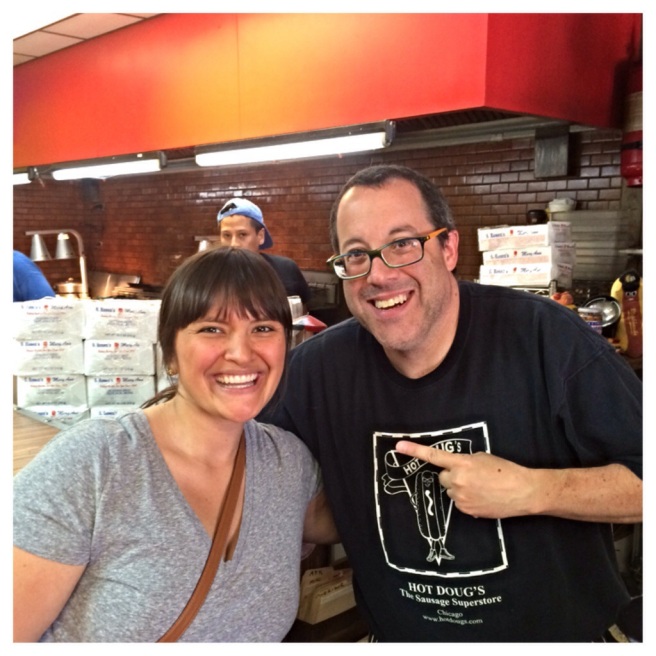 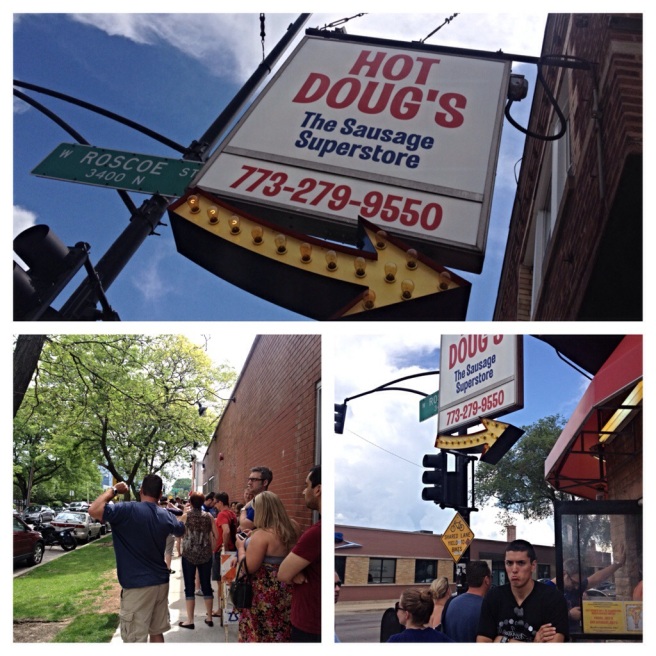